On Friday 29th March Professor Mike Fulford visited Silchester to give his annual update on the progress of excavations in the Roman site of Calleva. We had over one hundred people at the talk and some late comers had to sit on the balcony.

The first section to be investigated was the latrine which is situated just inside the main entrance to the building and some interesting discoveries were made as to how the latrine area had been extended over the years to cater for the growing population of the town.

Moving along towards the main bathing area, some new areas were excavated which brought up many interesting artifacts that are believed to have been misplaced or lost by bathers and subsequently discarded. A beautiful little enameled brooch was found as well as pieces of bone combs and even a gold ring with lovely filigree decoration.

Parts of the heating system under the floor was excavated and it can be seen that different methods of ducting were used – either stacks of tiles which allowed the hot air from the furnace to circulate around them – or solid stacks with ducts in between them which were likely to be less efficient at circulating the air but would have given a more solid support to the flooring above.

In addition parts of the old iron age defensive ditch were unearthed dating back to the first century BC. These will be excavated further next year.

Professor Fulford was really interested in the story of how the building had been changed over the years and the evidence of extension work and different building materials in the structures.

In her vote of thanks, Silchester Association chairman, Sara Westwood said she hoped that Professor Fulford would return to talk to the village again next year as it is such a popular event

Professor Fulford announced that the team will be back on the 17th June to start work this summer and there will be an open day at the dig on Saturday 6th July. We are looking forward to the next installment in 2020. 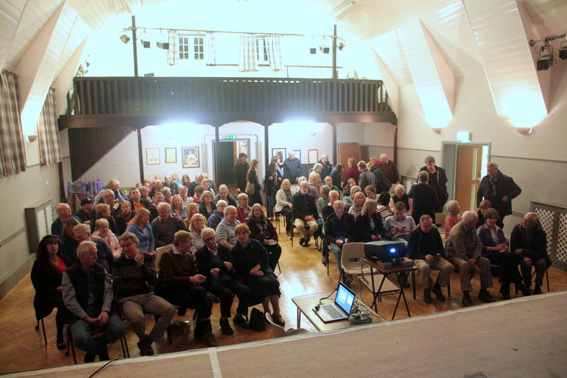 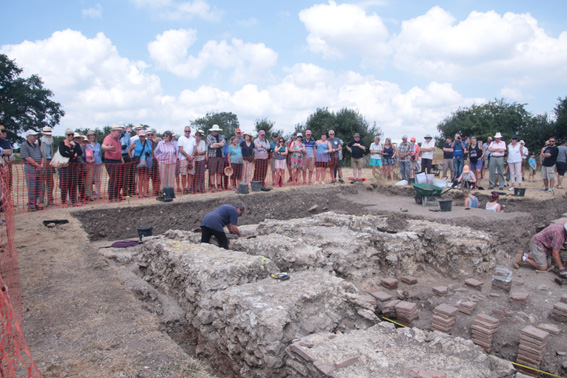 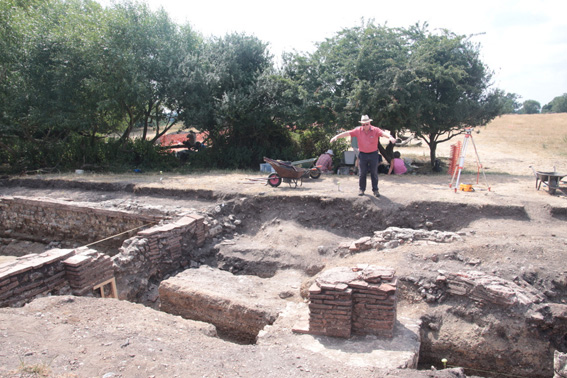 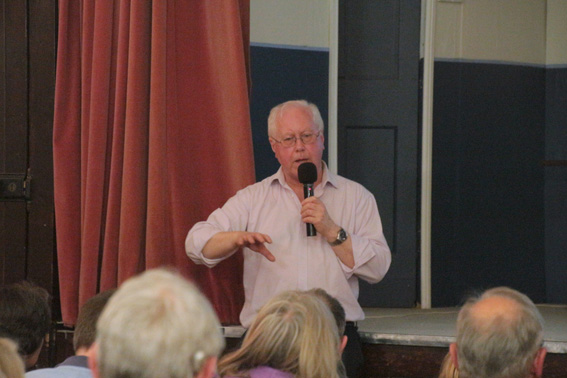 The Archaeological teams have been very busy this year both on the Roman site in Silchester and on several prehistoric sites in the surrounding area. The year began with the excavation of two enclosures in Pamber Forest, uncovering ditches containing seeds and charcoal which were carbon dated to have been deposited in the middle iron-age with some evidence of charcoal in the Roman age.

Work then continued at Simms’ Copse near Mortimer West End where two enclosures containing mid-Iron Age pottery were excavated and then the teams moved to the Windabout Mortuary where, although finds have indicated an early Iron Age settlement,the grave dates to the time of the Roman conquest around the first century AD. Six platters and two cups were found in very good condition, some which had been made locally and some brought over from Northern France.

The Little London Tilery was the next project where geophysical surveys had located what was thought to be a series of kilns. A very large Roman brick kiln was excavated which is thought to have had the capacity to produce tens of thousands of bricks and then two further pottery kilns were examined in the close vicinity – one key-hole kiln and one large rectangular one which were dated to around 50-60 AD.

Finally the team moved back to the Roman Town where, this year, permission had been granted to dig up Nick and Biddy West’s back yard to investigate the site of a third Roman temple which had been picked up by a geophysical survey a short distance from the two which were excavated in Victorian times and which lie partly under the churchyard. The team were interested in whether there had been any pre-Roman activity on the site and they did discover a well that had been sealed over during construction of the temple. Finds included pottery from around 70 AD and many tiles, some with the Nero stamp and they also uncovered a burial site of a horse which has now been dated at around 16-18th century and may have been buried before the construction of the barn!

This coming year, the team will be concentrating on the Roman bath site on the east edge of the town and will be looking for evidence of the usage of the baths and how it figured in the life of the people in the town.

We are so grateful to Professor Mike Fulford for giving up his time every year to come to talk to the village about his work and all present really enjoyed the presentation.

Professor Mike Fulford from Reading University, gave his annual talk to the village on the 3rd March to a packed village hall. Sadly no one under the age of 16 attended. Please encourage your children to come and learn more about our village.

Nine months on since the dig was formally closed and the site restored to pasture, the work continues. Although Professor Fulford is technically retired, his interest has now moved towards looking at the activities that would take place outside the city walls, in terms of supporting agriculture etc. He has written an excellent booklet under the English Heritage Guidebooks label, called Silchester Roman Town [ISBN 978 1 910907 02 3], which is a beautifully illustrated guide to the history of Silchester. The Association purchased 30 copies, which sold out during the evening. Copies can be ordered online directly from English Heritage

Here is a brief summary of the topics covered during the talk.

Professor Fulford started his talk by stating his ambition to pursue a better understanding of the relationship Emperor Nero (AD 54-68) appeared to have with Calleva following the finding of a significant number of tiles marked with the symbol of the Emperor.

The team investigated Insula III in more detail attempting to get a better understanding of the buildings in this section of the town. It appears that during construction a significant building suffered from subsidence issues despite the importation of large quantities of clay and as a consequence the building was not finished, which explains the archaeology in this area and confirms that Insula III did not contain significant numbers of large building despite the proximity to the forum in an adjoining Insula. Earlier excavations and the construction of wells probably caused the unstable topography. In Insula III carved stone was found that matched up with inscriptions found during the Victorian dig. The stone inscriptions formed parts of the name Atrebatum. In 2015 Insula III excavations uncovered the diagonal lines of the Victorian excavations. New techniques are being used on analyzing soil structure using micron thick sections of cubed soil preserved at specific stratified depths in the ground. This method can be used to trace the presence of livestock and understand the use of the same area of land over time.

The teams are now exploring outside the area of Calleva as part of the Silchester Environs Iron Age Project. The team are extending their studies to look at archaeological anomalies discovered by aerial photographic analysis and Lidar over 140km2 around Silchester. New archaeological sites were found (n=671) and information was added to 81 known sites. Neolithic banks were excavated at Wood Farm, circular settlements were found at Windabout Copse, south of Mortimer. The dig excavated burnt bone from an individual and eight pottery vessels, that are now in conservation, Their discovery is highly significant being the first burial of its kind found in England south of the Thames. Four of the pottery vessels were from France. Others were made locally and date to the early 1st century AD. Together the grave and its contents suggest an individual of high status with close connections with the Iron Age centre of Calleva. Geophysical surveys were also conducted at Church Lane Farm and Nelson's field in addition to Windabout Copse.

Progress has been made on examining enclosures in Pamber Forest. A trench identified a ditch and a remnant bank at one of three enclosures. Neolithic artifacts have been found.

Plans are afoot to look for Nero's brickworks in Little London and to examine Calleva Temple structures in the grounds of Manor Farm with the permission of Nick and Biddy West. 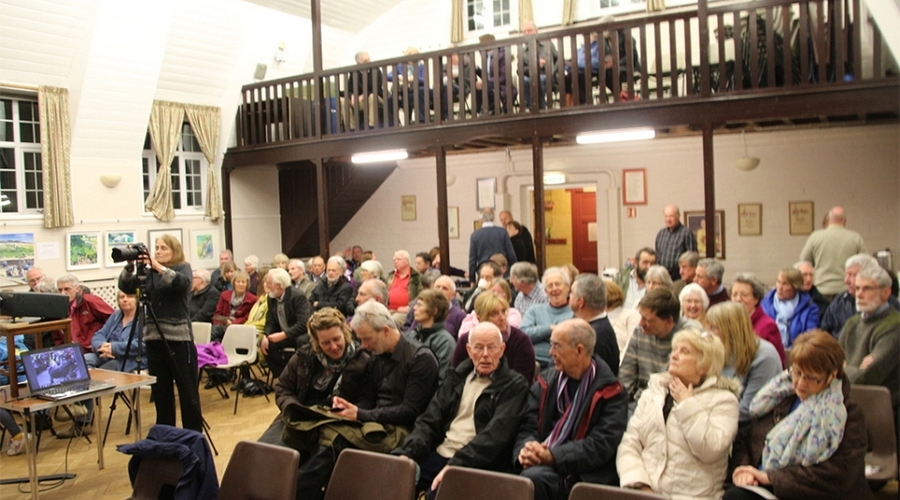